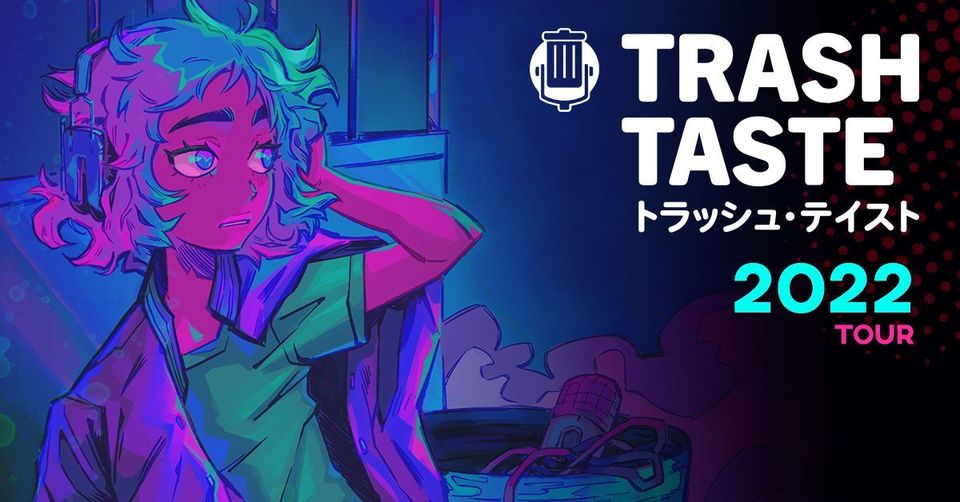 AEG Presents…
TRASH TASTE LIVE
WED, 28 SEP 2022 at 08:00PM EDT
Ages: All Ages
Doors Open: 07:00PM
Gigguk
Known as one of the pioneers of Anime Youtube, Gigguk makes videos about the world of anime. His satirical look and reviews on Anime have garnered him over 3M subscribers. His most popular videos are parodies of anime called Anime in Minutes. He doesnt eat pizza crust and is a member of the Trash Taste Podcast.
Twitter | YouTube Main Second | Twitch | Instagram
TheAnimeMan:
Joey Bizinger, better known as The Anime Man, is a Japanese-Australian YouTuber with over 3 Mil+ subscribers. Since 2013, he has been reviewing, analyzing, and critiquing anime, otaku, and Japanese culture in a comedic and cynical way. Aside from his main YouTube channel, you can catch him live on Twitch or on the Trash Taste Podcast.
Twitter | YouTube Main Second | Twitch | Instagram
CDawgVA:
Connor Colquhoun is a Japan-based Welsh online entertainer who is best known for his YouTube videos and Twitch streams as CDawgVA. He will go to great lengths to bring his audience joy, even at the cost of his own dignity. Connor is also a proud member of the Trash Taste Podcast.
Twitter | YouTube Main Second | Twitch | Instagram
The Trash Taste Boys – Joey, Garnt and Connor – have infiltrated the US! Come and watch them on stage as they talk, rant and discuss about everything and anything! Laugh, cry and rage at this one-of-a-kind comedy talk show!