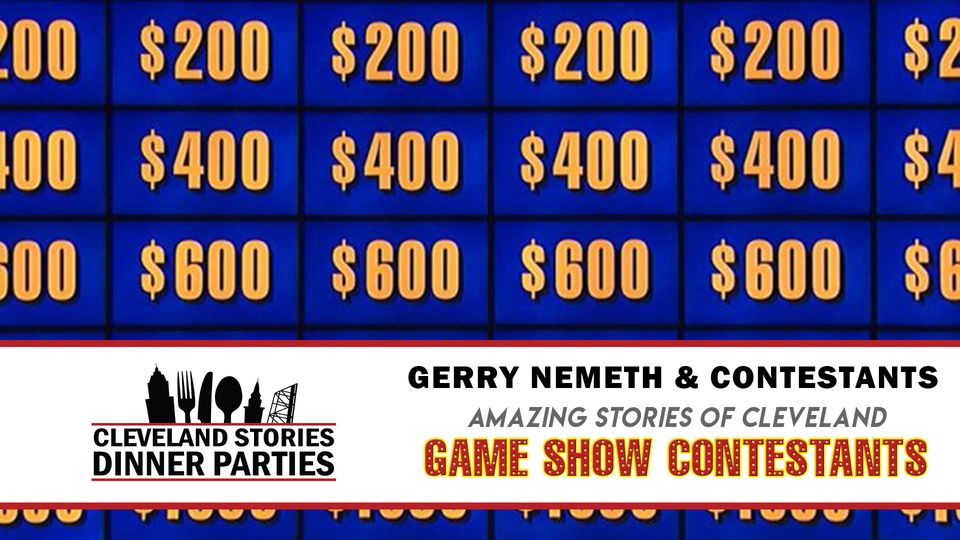 Cleveland Stories Dinner Parties
Venue: Supper Club
Showtime: 7:00 pm
Doors open: 5:00 pm
All Ages, Free Admission, Table Reservations Required
We’ve all seen them: Jeopardy!, Wheel of Fortune, The Price is Right, Who Wants to be a Millionaire?, and so many more game shows over the years. With Jeopardy! being in the recent spotlight with the passing of the legendary host, Alex Trebek, we look back to this game and what it’s brought to people around the world. Our storyteller, Gerry Nemeth, has not had the chance to play Jeopardy! but has gotten the chance to see the actual set in California – which is pretty cool! His love and passion for game shows has landed him a job being a college professor at Tri-C and Baldwin Wallace University teaching about the history of TV game shows. Matt Kish joins us as a Cleveland native Jeopardy champion from 2014, along with Kevin O’Neill who’s episode aired in 2000. Although he didn’t win, we went on to also be a part of Who Wants to be a Millionaire? in 2001 and won $125,000! We are also joined by Troy A. Clark who owns an impeccable collection of gameshow tapings going all the way back to Legends of the Hidden Temple!